From a contribution to a column by Eesha Williams (Editor) in the Valley Post, linked here.

Native Americans are trying to stop a plan to send hydro-power from Canada to Massachusetts. They have a web site at www.NorthEastMegaDamResistance.org.

Rich Holschuh lives in Brattleboro and, with seven other people, [serves on] …the Vermont Commission on Native American Affairs. That’s part of the state government. In an April 30 interview with the Valley Post, he said, “Indigenous people worldwide share the common experience of colonization. Colonization is the process of appropriating a place for one’s own use, exercising control by force for the benefit of the newcomer…. The original inhabitants of a place consider themselves to be a single entity: the people and the land are the same. It is a network of sustained, interdependent relationships overlapping with others in a balanced, self-supporting continuum. This balance is disrupted and harmed when those relationships are disregarded, by manipulation and appropriation for externalized profit. Colonization is not a historical event; it is an ongoing system, with lasting damage to the subjects while continuing to accrue benefit to the takers.”

Holschuh continued, “What is happening in the northeastern reaches of this continent, with massive hydroelectric development and export of energy to markets elsewhere, much of it in New England, derives from the same mindset that created the antecedent hydro facilities here on the Kwenitekw (Connecticut) river, and across the continent in the realization of so-called Manifest Destiny. The natural abundance of earth — the gift of Creation — has been coerced, privatized, commodified, extracted, and sold, without due regard for the lasting effects of that interruption of the sustaining cycles. The indigenous people of these places are implicated equally, left outside of consideration, with the network of relationships that constitutes their existence grievously harmed.”

Holschuh said, “The northern mega-dams may seem out-of-sight, and thus out-of-mind, not important or impactful to lives proceeding apace to the south in New England. Vermont, in its claims to cleaner, greener policy, derives a significant portion of its electrical energy demand from facilities such as those of Hydro-Quebec. This is projected to increase as the state adjusts its goals away from less-desirable sources through the Comprehensive Energy Plan. The issue has been raised with Lt. Governor Zuckerman’s Vermont 2050 Planning Group — it’s a very real exacerbation of an existing policy flaw. A reliance on imported energy, and its associated human and environmental costs, has been a contested issue in the past, and it should/will be again soon. This is not a problem in somebody else’s backyard. It is a problem of our own making and it is a repetition of what has and is happening right here in the homelands of the Abenaki and their kin. If we are being honest, this connection and the dynamics that effect it are easily recognized. What happens to one, happens to us all. And so, I recognize All My Relations and ask that together we seek balance and exercise compassion, seeing that there is a better way.”

The results of a momentous 2-year research project into the implications of Indigenous Land appropriation and redistribution through the Morrill Act of 1862, documented in a series of articles in High Country News that began March 30, 2020.

A lot to digest here…

“…Native Americans in the Valley and elsewhere in New England are looking at the [Plymouth] 400th anniversary through a different lens. For them, Plymouth Colony was the opening chapter of a far grimmer story, one in which regional tribes would be stricken by European diseases such as smallpox, forced from their land, and finally decimated by the violence of King Philip’s War in 1675-1676. It’s a fraught memorial, much like 2019, which marked 400 years since the introduction of African slaves to North America.”

Read the full story in The Recorder.

Mali Obomsawin has hit this one out of the park. She brings these truths home to Ndakinna and holds them up clear, bright, and strong. All I can ask is “Read this through carefully, take it to heart, and share widely.” It is ALWAYS about the Land and the People, inseparable.

Why do so few Americans know about Indian Country? Because the government continues to fight Native nations for land. Because American patriotism would be compromised by a full picture of American history. Because there is no one to hold patriotic historians accountable for writing Native people out of history books. The legal and moral foundation of this country is fragile, and by erasing Native people from the public consciousness, the slippery topic of “whose land is whose land,” (and why and how?), can be sidestepped altogether.

Ignorance is an accessible popular tool: it doesn’t require citizens to take up arms, acknowledge or interact with the intended target, leave their comfort zones, or jeopardize their status. As a weapon, ignorance is cheap, deniable, and nearly impossible to trace. Finally, ignorance is passively consumed and passively reproduced, cinching Native invisibility.

Link to the complete article in Smithsonian Folklife.

Full article as pdf: This Land Is Whose Land

Yesterday, May 6, 2019, Vermont’s Governor Philip J. Scott signed S.68 “An act regarding Indigenous Peoples’ Day” into law, without prior notice. Although the opportunity of a ceremonial signing has been denied, the objective has been realized. We will be able to tell a more complete story going forward. Christopher Columbus is an incontrovertible part of that story, but he has come to represent the onslaught of colonization and destruction with (dis)respect to those who where already here. And are still here. And whose resilience and understanding is witness to the efficacy of their relationship to this land. This is cause for recognition and honoring.
Received today, via Rep. Brian Cina, from the staff of VT Governor Phil Scott:
From: Smith, Kendal <Kendal.Smith@vermont.gov>
Sent: Tuesday, May 7, 2019 10:31 AM
To: Smith, Kendal
Subject: Action taken by the Governor on bill – May 6, 2019

The Governor has informed the Senate that on the on the 6th day of May, 2019, he signed bills originating in the Senate of the following titles:

S.53        An act relating to determining the proportion of health care spending allocated to primary care

The Governor has informed the House of Representatives that on the 6th day of May, 2019, he signed bills originating in the House of the following titles:

H.321    An act relating to aggravated murder for killing a firefighter or an emergency medical provider

Video links for ORCA Media/CCTV coverage of Committee hearings – testimony and debate – for S.68  of the 2019-2020 Session.

This Week in Brattleboro History. We are happy to release our 200th podcast episode. BAMS students interviewed local historian Rich Holschuh about his research into William Brattle, our town’s namesake. Rich explains how Brattleboro gained its unique name, and also shares insightful background information about early relations between the English and Native Americans. Click below to hear the story… 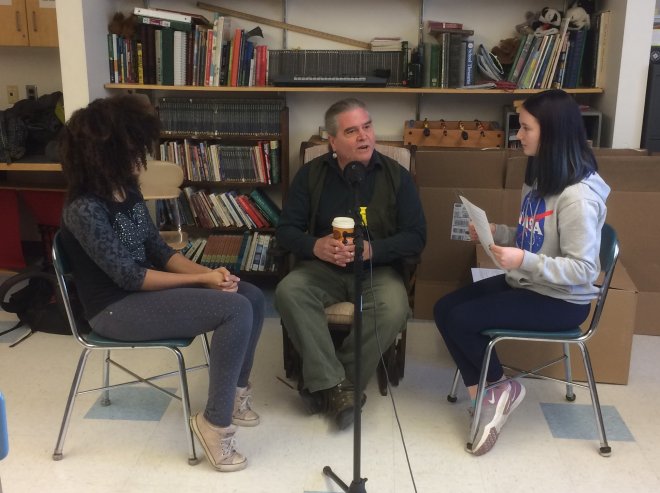 Interview underway at BAMS with Amani and Priya. Photo by teacher Joe Rivers.