A just-released short film by Vince Franke of Peregrine Productions, LLC, created to support the watershed education programs of Lake Champlain Sea Grant, UVM Extension, the Rubenstein School of Environment and Natural Resources, and to help preserve these stories for the Abenaki and others. Funding was provided by NOAA, Sea Grant, and an anonymous donor.

Centering on Bitawbagw/Lake Champlain and then water in general, the film is a series of interviews with people in the Native community expressing their understanding of  being in relationship with life-giving water. Each story teller provides their own unique interpretation; I was honored to participate in this group effort with Chief Don Stevens, Chief Roger Longtoe Sheehan, Chief Eugene Rich, Melody Brook, Lucy Cannon Neel, Cody Hemenway, Morgan Lamphere, Bea Nelson, Fred Wiseman, and Kerry Wood.

Advocates for racial justice in Vermont hope that a recently created poster will soon be seen in schools, libraries, town offices and small businesses all over the state. The poster reads: “Please respect and protect N’Dakinna (our land) while you are here. This is the homeland of the Western Abenaki People.”

The wording and imagery on the poster was chosen with great care by Don Stevens, chief of the Nulhegan Band of the Coosuk Abenaki Nation, who worked with Quebec based Nulhegan Abenaki artist Jon Guilbault to make sure that the most important Abenaki cultural symbols would occupy a prominent place in the artwork.

“It is important to remember that we are but stewards of this land we occupy and are only one part of the web of life,” Chief Stevens said. “What we do to the earth, we do to ourselves. This poster is a reminder that the creator gave the Western Abenaki the responsibility to care for our land and in turn would provide for our needs. Once the land was taken from us, we could no longer fulfill this responsibility. We ask that you respect and protect the land so it will continue to provide for us all.“

See the full article in the Addison Independent. 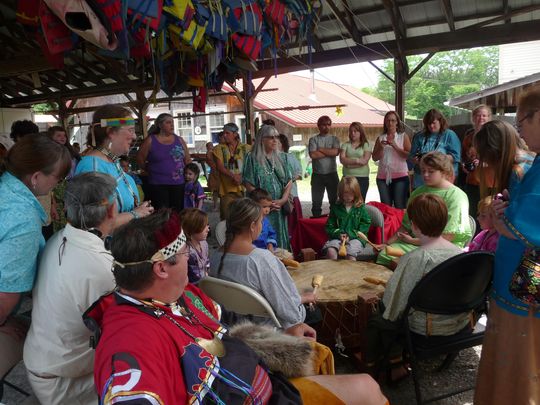 Join the Abenaki community on June 23 and June 24 at Lake Champlain Maritime Museum near Vergennes for a weekend of family fun and cultural sharing that is deeply rooted in local Native American heritage.

Organized by the Vermont Abenaki Artists Association with members of the Elnu Abenaki Tribe, the Nulhegan Band of the Coosuk, Koasek Traditional Band of the Koas Abenaki Nation, Missisquoi Abenaki Tribe and guest artists, the event is designed to give visitors an Indigenous perspective on life in the Champlain Valley both past and present.

Activities will include drumming, storytelling, craft and cooking demonstrations, an Arts Marketplace, and presentations by guest artists including Black Hawk Singers Drum Group, and Jesse Bruchac telling stories in Abenaki and English, accompanied by flute and drum.

See the full story in the Burlington Free Press.

Chief Don Stevens of the Nulhegan Band of the Coosuk-Abenaki Nation has been appointed by Vermont Attorney General T.J. Donovan to serve on the Racial Disparities in Criminal and Juvenile Justice Panel.

According to the attorney general’s website, the panel’s goal is to “develop a strategy to address racial disparities within the State systems of education, labor and employment, access to housing and health care, and economic development.”

Stevens, a Shelburne resident, said he has been working racial disparity issues for “many years. Mostly in the capacity as Chief and how it affects the Abenaki Community.”

He is working on cultural projects with Burlington’s mayor’s office, regularly attends Vermont State Police Fairness and Diversity meetings at Vermont Law School, and recently testified at hearings before the Vermont Legislature regarding bill S. 281 which researches systematic racism within the state government.

Though his area of expertise is focused on Native people and the Abenaki Nation, he said, “My goal is to take a look at policies and procedures within the criminal and juvenile justice system and offer insights on areas of improvement. There are specific areas within the Department of Corrections and Child Welfare Areas that need to be addressed in regards to Native peoples. As a minority myself, I hope to offer perspectives in whatever areas the panel decides to concentrate on.”

Link to original article in the Shelburne News.

Mayor Miro Weinberger and Chief Don Stevens from the Nulhegan Band of the Coosuk – Abenaki Nation today announced that the City of Burlington and Vermont Abenaki Alliance (made up of the four Abenaki Tribes recognized by the State of Vermont) have agreed to explore several projects to promote awareness of Abenaki history and culture. This announcement is the result of conversations between the City and Chief Stevens that arose during the discussion of the Church Street “Everyone Loves a Parade” mural. In lieu of participating in the Mural Task Force to determine the future of the mural, Chief Stevens and the Abenaki Alliance have chosen to pursue other projects, which will include an annual summer event on Church Street and may include a display of cultural artifacts at the Burlington International Airport, among other potential projects. These projects will build on Burlington’s previous work with Abenaki communities to create the Chief Grey Lock statue in Battery Park and the City Council’s acknowledgment and support of recognition of the Abenaki Nation in September of 1995.

“Abenaki Tribes have a long history within the State of Vermont and with the City of Burlington,” said Chief Don Stevens. “As leaders within our Abenaki communities, the Chiefs have decided not to participate in the ‘Everyone Loves a Parade’ Mural Task Force, but to find other positive avenues to promote our culture within the City. We look forward to collaborating with the City on projects that will increase local and international awareness of Abenaki history and culture. Finally, if the mural is to be changed or altered, we do feel that the Native person depicted on the mural should accurately and historically represent Abenaki people from this region.”

“I appreciated Chief Don Stevens’ input as we have been working through the community challenges related to the ‘Everyone Loves a Parade’ mural,” said Mayor Miro Weinberger. “The City welcomes the opportunity to continue to work with the Abenaki Alliance to find ways of properly recognizing the role of the Abenaki in the history and future of this region.”

Please note that this communication and any response to it will be maintained as a public record and may be subject to disclosure under the Vermont Public Records Act.

Brattleboro Community TV (BCTV) has archived the proceedings at the regular Vermont Nuclear Decommissioning Citizens Advisory Panel (VT NDCAP) meeting held at Brattleboro Union High School (BUHS) on March 22, 2018. The focus of the evening was to learn about the Settlement Agreement reached between all the parties involved, with the exception of CLF. The author, representing Elnu Abenaki with the support of Nulhegan and Koasek, adds his comments regarding the process at 51:37, and answers questions at 1:10:56 and 1:18:27.

“This is an ancient Native game,” explained Donald Stevens, chief of the Nulhegan band of the Abenaki nation. “You slide a stick down the track. Whoever goes the farthest wins.”

The competition is generally friendly. But sometimes, the winner takes all the sticks, said Stevens. “If you’re playing against another nation, be prepared to lose your sticks.”

The games were held in Derby Line for the last three years.

Read the full account by Kymelya Sari in Seven Days.