With the release of two new books, Daniel Paul is adding new material to his decades-long crusade to educate people about Mi’kmaq history.

The Mi’kmaw elder, who is best-known for his seminal history book We Were Not the Savages, recently published his first, and likely his last, novel Chief Lightning Bolt. Paul wrote the novel 20 years ago and then put it aside. He returned to it with a fresh set of eyes, had others read and edit it, and decided it was time to release the book publicly. “I wanted to see it published before I die,” he said in a recent interview.

Paul, who was born on the Indian Brook Reserve (now Sipekne’katik First Nation), turns 79 next month. He had a brush with mortality when he underwent treatment for prostate cancer. Doctors gave him the okay after he completed treatment in November 2016, but the ordeal took its toll on his health.

In his novel, published by Fernwood Publishing, Paul brings to life a contemporary Mi’kmaq legend of a man, who becomes chief and a renowned warrior and peacemaker. In the process he comes to embody Mi’kmaq values of humility, courage, honour, and service to others.

“The best way to do it (tell the story) was a fictional novel,” he said.

“Some people accused me of writing fiction when I wrote We Were Not the Savages,” he added with a laugh.

Read the full article by Allison Lawlor in the Chronicle-Herald. 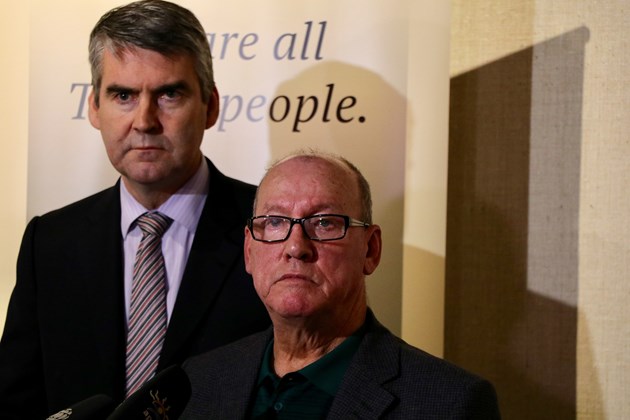 Premier Stephen McNeil was making every effort to move from insult to consult after a meeting Thursday with the Assembly of Nova Scotia Mi’kmaq Chiefs. “The meeting started out this morning with an opportunity for me to express my regret and my apologies to the chiefs and to members of their communities,” McNeil said.

“The words that were attached to a brief that went before the court were not mine and not my feelings. I believe the foundation of this province and this country is in those treaties. We have a duty to consult, the Supreme Court has dealt with this issue a long time ago and it’s my responsibility as the premier of this province to make sure that we follow through on respecting the rights of the Mi’kmaq.”

Respect was not at the forefront in a Nova Scotia Supreme Court appeal case last week when Justice Department lawyer Alex Cameron described the complainants, the Sipekne’katik band, as a conquered people who had surrendered their sovereignty to the British Crown in the 1700s, negating the duty of the province to consult on industrial projects.

Read the full story at localxpress.ca.

Refer back to the incident that provoked this apology.

A legal brief submitted on behalf of the province of Nova Scotia denies treaty rights and labels the Mi’kmaq as conquered peoples.

“To suggest that we are ‘conquered’ is a racist taunt,” wrote Millbrook Chief Bob Gloade in a media release. “At its worst, it has been used against Indigenous Canadians to perpetuate or justify a state of inferior legal, social or socio-economic conditions.”

The brief is part of a court case centred on consultation with the Sipekne’Katik Band over a natural gas storage project. The band asked for a judicial review of the provincial permits that approved the Alton Gas project. But a court case about whether the Crown meaningfully consulted with one band over a particular project, has brought up what many are calling offensive arguments about treaty rights that extend to all Mi’kmaq in Nova Scotia.

Today Sipekne’katik First Nation goes to the Supreme Court of Nova Scotia to challenge the provincial government’s consultation process regarding the Alton Gas project. Sipekne’katik’s essential argument is that the band was not adequately consulted about the project, despite the obvious direct impacts it will have on the community. The provincial government’s legal strategy to defend against this claim is deeply troubling.

The province is attempting to win this case by undermining the sovereignty of the Mi’kmaq people, claiming that only “unconquered peoples” are owed a duty of consultation. It argues that Sipekne’katik First Nation ‘submitted’ to the Crown in the 1760 treaty, and is therefore not owed the government’s constitutional duty to consult.

Read the full update at The Council of Canadians online. 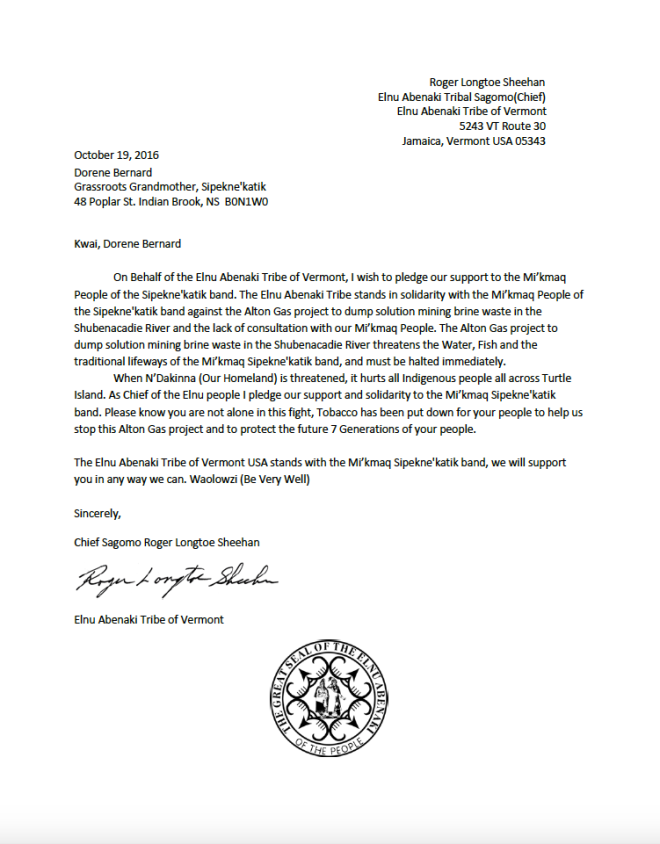 Elnu Tribe of Abenaki has confirmed its support for the Mi’maki community at Sipekne’katik on the Shubenacadie River in Nova Scotia, as they stand in solidarity against the Alton Gas salt cavern storage project. A letter has been sent to the Grandmothers expressing unity and understanding, and upholding the shared responsibilities of the Wabanakiak in their homelands, N’dakinna.