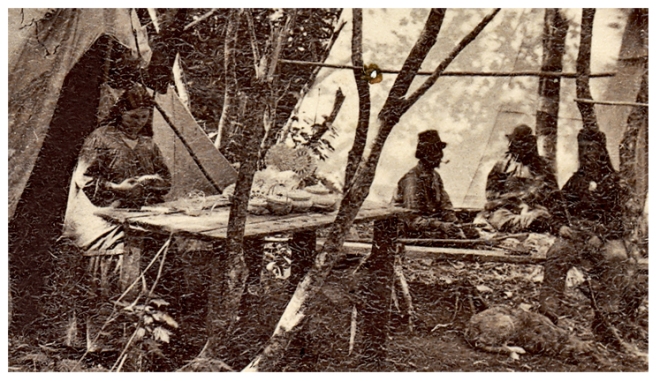 From the Brattleboro Words Project website, at the bottom of the Harris Hill site-specific page (scroll down)… An audio track contributed to the multiple layers at this place. Much has been seen here, in the thousands of years it has been a dwelling place; beneath the feet of the ski jump visitors lies a long line of stories.

Much more info here, at another Sokoki Sojourn post. 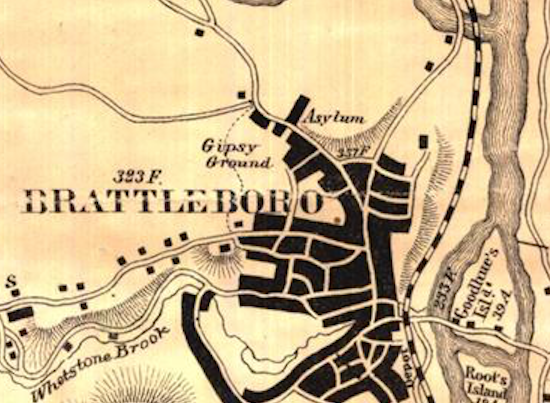 Charles William Grau was a noted physician first at Brattleboro’s Wesselhoeft Water-Cure (1848), followed by the Lawrence Water-Cure (1853), and later in private practice. A key ingredient of his naturopathic treatment regimen was extensive outdoor exposure, in the form of walks, and drives. To encourage and facilitate the practice, he became a skilled cartographer, preparing detailed maps of nearby paths, roads, and scenic features for devotees.

On his large area map, there is a dotted line going north-south, connecting Western Avenue with Asylum Street, and intersecting the latter between the Retreat proper and the Retreat Farm. Just a trail or footpath at the time, this was to become today’s Cedar Street. Upon the area immediately south of the Farm and west of the Retreat is a two-word legend cryptically stating “Gypsy Grounds.” This is the land at the base of Harris Hill Ski Jump, still a cleared field surrounded by forest and relatively undisturbed except for the looming jump ramp.

While there were a number of Romanichal (an Anglo-Romani subgroup from the British Isles) in North America at the time – most of them deported here unwillingly – “gypsy” was a term applied generally to anyone with a perceived migratory lifestyle. Most of the better-known Eastern European Romani emigrated to the US later in the 1800’s, primarily to urban areas. In Vermont, sociologists agree that the term “gypsy” was often a reference to the indigenous Abenaki and their kin, some of whom adopted an intinerant peddler version of their annual subsistence cycles. Returning to their traditional homelands in family groups with horse-drawn wagons, they sold baskets and woodenware, worked as day laborers, offered herbal treatments, and hunted and gathered as had their ancestors in the self-same places.

Dr. Grau’s 1860 “Gypsy Grounds” was and is one of these places. There are a number of historical newspaper accounts of gypsy visitations to Brattleboro in the 19th century, focusing on several specific localities. The area around the Retreat Farm and Meadows is documented as a known pre-European-Contact settlement site. The developing onslaught of war and colonization made sustainable Abenaki continuance untenable, driving the people and their culture out of sight and often far away. But the descendants of those forced off the land remembered their ties to the homelands and would return as they were able, living on the fringes of the growing towns and conducting their own affairs in a radically-changed social landscape. And those descendants are still here in Vermont, reclaiming their stories and reaffirming their connections to the land, at the place called Wantastegok and now known as Brattleboro. 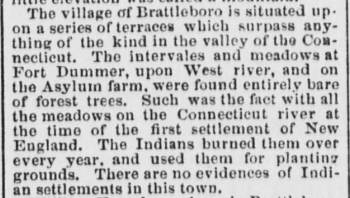 From The Vermont Phoenix (Brattleboro, VT) July 7, 1876, an excerpt of the Centennial Address given by the Hon. Charles K. Field.

The final sentence of the paragraph above, following the previous observations, demonstrates the willful, almost ludicrous, elision of Native presence by descendants of the colonizers. The very same paragraph affirms the evidence of long-term indigenous occupation and specific resource-management practices.

As part of  this year’s Brattleboro Winter Carnival celebration, the newly-minted non-profit Retreat Farm‘s Open Barn schedule includes two sessions with Abenaki storytellers. Stop in to join Willow Greene on Friday and Roger Longtoe Sheehan on Saturday for the winter tradition of storytelling, along with other opportunities hosted by the Farm. 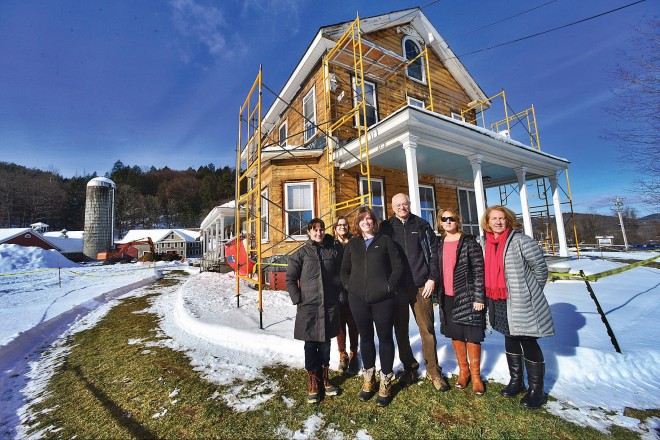 The Retreat Farm’s makeover-in-progress is mostly likely observed if you’re driving in or out of Brattleboro via Route 30. The Windham Foundation donated the property to Retreat Farm LTD and grants have propelled the nonprofit to this point. “We’re just about to kick off additional fundraising,” said Arthur “Buzz” Schmidt, Retreat Farm president. Close to $1 million has already been spent on planning, groundwork and renovation of the farmhouse, according to Schmidt’s estimate.

Retreat Farm was transferred to his group on Aug. 19, a little later than originally anticipated due to issues with subdividing the land. The Grafton Cheese Factory had to be separated from the parcel. The business is owned and operated by the Windham Foundation. Last winter, the state approved an Act 250 permit so some development on the property could begin. A master plan application will still be needed for Act 250 review.

Altogether, there are 600 acres that Schmidt’s group is responsible for maintaining, including Retreat Meadows, trails, woodland and a farmstead. “It’s an expansive complex property,” Schmidt said. “There’s an underlying easement with the Vermont Land Trust that restricts the development on the property really to one 25-acre farmstead. That’s where all the development has to occur. We can develop farm resources on the other lands and we’re doing that.”

Note: The land at and near the Retreat Farm is highly sensitive for indigenous heritage and cultural lifeways, in more ways than one. Discussions have been initiated with the team (specifically Buzz and Lu, at this point); they are aware of this aspect and intend to incorporate awareness and respect into their long-range plans.

Full story by Chris Mays in the Brattleboro Reformer.

More information can be found at retreatfarm.org and on Facebook.

Worth sharing in its entirety: this post by Lise LePage appeared on iBrattleboro.com last month, amidst the effort to make a change from Columbus day to Indigenous Peoples’ Day here in Brattleboro. She used the occasion to give a synopsis of her personal research over the years into the pre-contact and early contact history between the Sokwakiak and the first British settlers. For those unfamiliar with the details of that first clash of cultures in what we now call Vermont, it’s a good look at a quintessential example of colonialism at work right here. Original link here.

It’s not often that something happens that cries out to be corrected and then, in a matter of days, it is.  I’m not talking about Vermont’s GMO law either (which Congress mooted within the month) – no, I’m talking about Indigenous Peoples Day which has been proposed, here and elsewhere, as a less racist and more fair alternative to traditional Columbus Day.  Unfortunately, honoring native American people was not something the Selectboard could get its collective mind around and Indigenous Peoples Day lost here in Brattleboro by a vote of 2-3.  But just when you thought all was lost, along comes Governor Shumlin with a state-wide proclamation of Indigenous Peoples Day, signed, sealed, and delivered.  What do you know, we get to celebrate Indigenous People’s Day after all.

This is a good thing.  We should celebrate the native people of our country – for starters, we’re sitting on their land. In fact, the first beachhead established by the British settlers in the Brattleboro area was on the site of a Squakeag village situated on the Hinsdale side of the Connecticut just above the Vernon Dam.  Ironically, Fort Dummer was established to control the Indians moving up and down the river, especially those raiding the English villages further south.

Before the English got here, the Squakeag  (southernmost branch of the Abenaki) were the inhabitants of the land from Brattleboro down to Northfield, Massachusetts.  It was a good place to live – abundant beaver and salmon along the waterways, decent land for cultivation, and best of all, maple sugar in the spring.  The Squakeag apparently loved to sugar – it was the one activity that brought the whole family of men, women, and children, young and old together.  Then as now, people like a sweet treat.

There’s an anecdote published in Thomas St. John’s Brattleboro History Scrapbook that suggests that the area around the Retreat Meadows might once have been a regular gathering place for native people.  According to Rev. Jedidiah L. Stark of West Brattleboro (writing in the 1830s), unspecified native people used to come here and dance in the meadow above where the Retreat Farm used to be.  According to Mr. Stark, the circle was so compacted from the weight of those many dancing feet that it remained visible and free of vegetation years after the Indians stopped coming.

Another indicator that Brattleboro’s Retreat Meadows was at the least a notable location for native people are the pictograms found carved in the rocks around the Meadows.  Surely there was a reason to mark this spot so strategically located at the confluence of two rivers.  Perhaps (I surmise) people came through here often on their way to other places and stopped to camp (and perhaps dance) here.  It would make sense.  The first lasting  settlement in Brattleboro by an English person* was Arms Tavern, an inn and stagecoach stop, located where the Retreat Farm buildings are now.   One marvels at the coincidence.

Native people made one of their last visits to our area in the 1850s when an elderly chieftain made his final visit to Bellows Falls.  He and his people had made summer visits for generations, and the old chief wanted to be buried with his ancestors.  As autumn turned to winter, he passed away and was buried by his sons, who then traveled back to Canada never to return.  The Indians who visited Bellows Falls had long since ceased to be scary and local residents looked forward to their arrival each spring.  It was a sad year when Bellows Falls realized that their Indian visitors would not be coming back.

Today, many descendants of the Squakeag band live in the St. Francis area of Canada where they were driven in the aftermath of King Philip’s War.  Others still live here in Vermont, assimilated under English names, partly in self defense.  We can’t alter the past, but here in the present we can take one small step toward owning that past.  Happy Indigenous People’s Day, everyone!

*The first less lasting settlement was located in the exact same location, a homestead built by Captain Fairbanks Moore for himself and his family.  Unfortunately, he and his son were both killed in an Indian raid soon after taking up residence there, and the remaining Moores, after being redeemed from captivity, moved away. 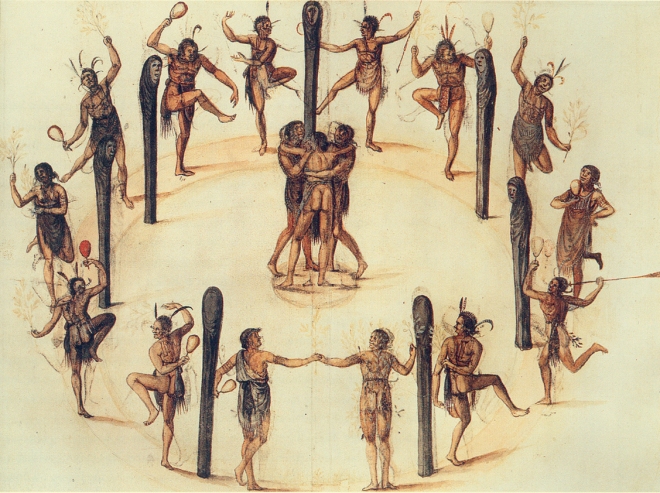 An integral part of this place, here in Wantastegok (Brattleboro):

I have also been told, that among the broken hills back of where Joseph Goodhue now lives, was to be seen, not long after the commencement of the settlement of this town by civilized people, the remains of an establishment for the Indian dance. A circle trodden hard, so hard that it refused vegetation, was distinctly marked, and a substantial post was standing in the centre, with holes in the earth around it, supposed to be places for fire.

From “Lecture on the Early Settlement of Brattleboro” by Rev. Jedediah L. Stark (May, 1832)

Pieces of the past, to be woven back into the fabric of our lives in this land. #ReclaimingWantastegok #1