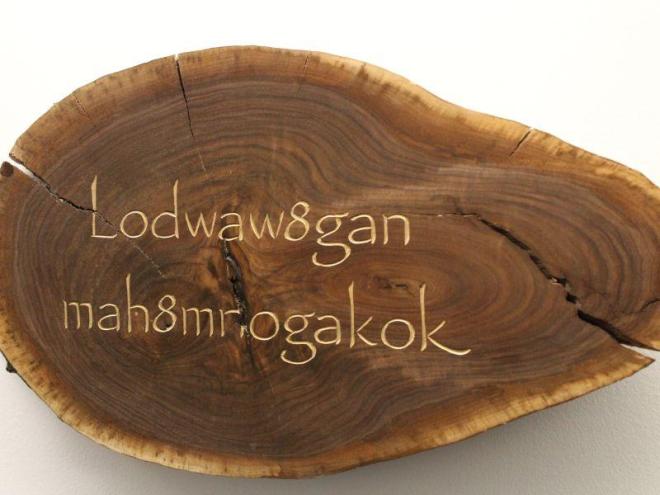 For his exhibition, Tim Brookes carved phrases into indigenous wood using disappearing or endangered alphabets from across the globe. Pictured, in Abenaki, the phrase, ‘Language of the grandfathers who went before’ is carved into a plank of walnut. Photo from VPR.

Six years ago, writer and Champlain College professor Tim Brookes carved letters into wooden planks to give to family as holiday gifts. The presents were well received and Brookes enjoyed his new hobby. He added new and different alphabet letters and languages to his hand-carved signs. Then, by chance, Brookes learned just how many of the globe’s writing systems were disappearing and a project was born: The Endangered Alphabets Project.

Brookes talked with VPR about the Endangered Alphabets Project exhibition, up now at Champlain College through March 10. The thirteen carvings each bear the phrase, “Mother Tongue,” written in Abenaki, Balinese, Mandean, Inuktitut and several other cultures whose written word is disappearing.

Full article and podcast at VPR.

This is Part 2 of a two-part story, within the podcast series from Brattleboro Historical Society, produced by Joe Rivers and his BAMS history students. You can check out Part 1 here. It gives additional background to the subsuming of critical areas in Sokwakik, and particularly the flooding of  the Retreat Meadows, by the completion of the Vernon, Vermont hydroelectric dam in 1909. Prior to this date, the now-flooded meadows – known as mskodak in Aln8baiwi – were prime farmland for the Sokwakiak who dwelt here, and subsequently the European settlers that arrived in the mid-1700’s. There are multiple newspaper reports of native burials being exhumed within this alluvial bowl, just west of the mouth of the Wantastekw (I will be documenting them here over time). Sokoki Abenaki heritage and interests were ignored and ravaged, a situation which remains ongoing and challenging.

The latest podcast from Brattleboro Historical Society, with Joe Rivers and his BAMS history students. It gives some good background to the subsuming of critical areas in Sokwakik, and the mid-Kwanitekw valley in general, by the construction of the Vernon, Vermont hydroelectric dam early in the last century. Many acres of riverside land were condemned to be flooded in the name of progress, the first project of its kind in the region, with many more to follow. This was a for-profit venture by a group of both local and regional businessmen, to generate power for distant markets at the expense of everything else. Sokoki Abenaki heritage and interests, being a riverine-centric culture, were ignored and ravaged, a situation which remains ongoing and challenging. The resulting impoundment was later accessed and the land further degraded by the construction of the Vermont Yankee nuclear plant immediately upstream of the dam itself.

More background toward understanding the story behind “How did we all end up in this situation?”  – as I often repeat, it’s all connected.

Thank you to Joe Rivers and Reggie Martell at the Brattleboro Historical Society, for your interest, commitment, and technical skills, in putting this together. It is an honor to work with you toward restoration for the indigenous people, the Abenaki and their ancestors, to their rightful and relevant place. In Aln8ba8dwaw8gan: Askwa n’daoldibna iodali – we are still here.

I appreciate this photo (by Reggie), with our guardian mountain Wantastiquet behind and the provincial flag of Quebec on my shirt, repping for my grandfather, both aspects of the motivation behind this journey of understanding.

Early Vermont histories portrayed this area’s aboriginal peoples as transients who occasionally passed through southern Vermont, en route to and from Northern New York and Canada, but were ultimately not residents of the area and therefor had little claim on these lands.

In this podcast [BAMS history teacher] Joe Rivers and his intrepid band of middle school historians show that those early Vermont histories were very much mistaken.

This podcast is part I of a two-part series.

An interview of this author by Chris Lenois on his Green Mountain Mornings show, a program of WKVT Radio at 100.3 FM and 1490 AM in Wantastegok/Brattleboro, VT. The live show aired from 8-9 am on October 10, 2016, Vermont’s first Indigenous Peoples’ Day. Enjoy this day!