I want to sincerely thank everyone here who pitched in to the Apess campaign to place an historical marker up in Colrain, MA commemorating Colrain as the place of William Apess’ birth in 1798. The marker has been purchased with the funds we raised together and it is scheduled to go up on the front lawn of the Griswold Memorial Library on Saturday October 13th of this year. I’d like to make this an event, a ceremony, and a celebration of continued indigenous presence in the region–so please mark it on your calendars and, if you can, come join us on October 13th. It may also be your last chance to pick up one of these fashionable What Would Apess Do t-shirts. More info to come.

“when this tree of distinction shall be leveled to the earth, and the mantle of prejudice torn from every American heart–then shall peace pervade the union.” William Apess

A great piece on NPR yesterday (June 30, 2017) with a nearly hour-long audio track about early trail systems and their multi-levels of significance. Listen here.

“Long before our modern highways, there was an extensive network of Native American trails up and down the East Coast. This hour, we hear about efforts to map these old trails and find out how they’re helping archaeologists and others learn about the past.

We begin our conversation in former Cherokee country to find out why a North Carolina man and an archaeologist are mapping hundreds of miles of old Cherokee trails. Then we head back to Connecticut’s woods where many Native American tribes used trails to link villages — spurring on trade and facilitating war.”

What better way to spend a Friday night in May?

Drew Lopenzina, who calls Western Massachusetts home, currently can be found at Old Dominion University in Norfolk, Virginia, where he is professor of Native American and Early American literature. His talk will focus on the remarkable life, writings, and activism of the Colrain-born 19th-century Pequot Indian minister William Apess. Lopenzina is the author of two books: Red Ink: Native Americans Picking up the Pen in the Colonial Period and his recent publication, Through an Indian’s Looking Glass: A Cultural Biography of William Apess, A Pequot. Through his works Lopenzina hopes to bring attention to the poignant historical contributions and sustained presence of Native American communities in the northeast.

BOOKS WILL BE AVAILABLE FOR PURCHASE AFTER THE PRESENTATION.

[From Drew on Facebook. I can vouch for this guy.]

If you missed Drew Lopenzina’s talk, he’s back in May at GCC.

Professor Drew Lopenzina (Old Dominion University) will focus on the remarkable life, writing and activism of this 19th century Pequot minister. Lopenzina’s newly published book, Through an Indian’s Looking Glass: A Cultural Biography of William Apess, Pequot will be available. 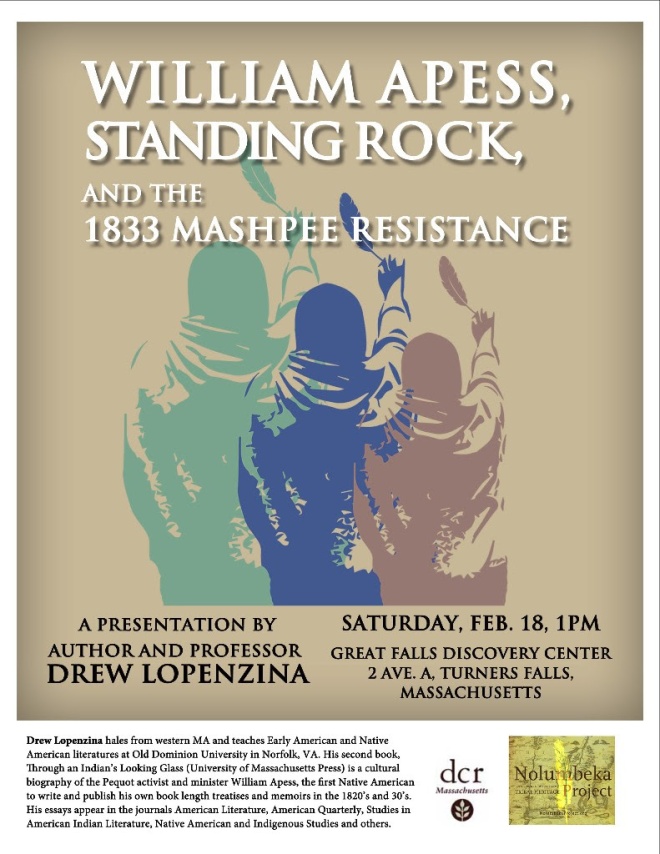 Author and Professor Drew Lopenzina will be giving a presentation at the Great Falls Discovery Center, 2 Ave. A, in Turners Falls, MA on Saturday, February 18, at 1 p.m. The event is free and co-sponsored by the Nolumbeka Project and DCR.
William Apess was born close by, on January 31, 1798 in Colrain, MA.

Drew Lopenzina hails from western MA and teaches Early American and Native American literatures at Old Dominion University in Norfolk, VA. His second book, Through an Indian’s Looking Glass (University of Massachusetts Press) is a cultural biography of the Pequot activist and minister William Apess, the first Native American to write and publish his own book length treatises and memoirs in the 1820’s and 30’s. Advance praise by Barry O’Connell states that Lopenzina “brings Apess nearly fully to life, which no one else, among many scholars, has. I know of no better reader of Apess’s own writing.”Lopenzina is also the author of Red Ink: Native Americans Picking up the Pen in the Colonial Period. His essays appear in the journals American Literature, American Quarterly, Studies in American Indian Literature, Native American and Indigenous Studies and others.